I’ve been trying to write this post for 2 weeks now and I’ve had to go back and edit it for one reason or another. It started when the Governor of Indiana, Mike Pence, signed the Religious Freedom Restoration Act into law back in late March. Only a few hours later, I saw some very disturbing posts being made on Facebook. I suspect many of you saw them, as well. What I wonder, though, is if you saw the posts being made on the Indiana State Chamber of Commerce’s page by people from around the world? Let’s just say they were REALLY ugly and leave it at that. Here’s the Chamber’s response: 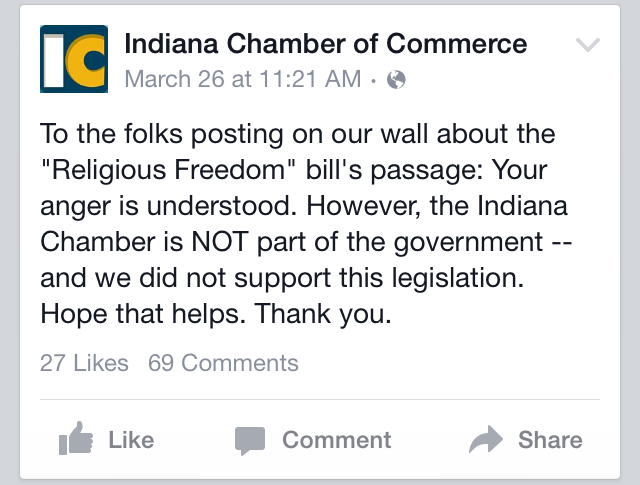 Now, I know what you may be saying. “Jay…they’re right! The Chamber isn’t a government entity and the anger and frustration shouldn’t have been leveled at them.” Of course I agree with you, but let’s take a deeper look. I went back to January 1st of this year and couldn’t find a single instance where the State Chamber posted anything on Facebook in reference to this pending legislation prior to it being signed, or eventually amended. There was one post that shared a link that led to a 2 sentence reference to the Chamber’s opposition of the bill, but I REALLY had to dig to find it. Beyond that? Nothing at all.

I thought that was strange, as there was no doubt in anyone’s mind that this bill could potentially cause considerable harm to the economic environment within the State. So I dug further. I looked at as many local Chambers from across Indiana as I could find. I searched the major cities and I looked at small towns. Now, I have a tremendous amount of respect for the Indiana Chamber and for local Chambers and Associations everywhere, and while I’m SURE that there were exceptions that I couldn’t locate, the point I’m making is that I couldn’t identify a single, solitary comment from any Chamber of Commerce on either side of this legislation until AFTER Governor Pence signed it. Nobody seemed to support it, but nobody opposed it either. In case you haven’t seen the news in the last few weeks, protestors (and supporters) have come out of the woodwork. From celebrities calling for boycotts across the State, Charles Barkley calling for the NCAA to move future Final Four tournaments from Indianapolis, Angie’s List saying they would put off growth plans within Indiana, major conventions suggesting they might move and even other States cutting travel funds for anyone visiting Indiana, the voices were heard. I’m no rocket scientist here, but was this so hard to predict? I don’t believe it was…in fact, I’m quite sure of it. Remember what I said earlier: The Indiana Chamber of Commerce opposed the bill before it was signed at the State House for a reason. They knew that it would have far-reaching implications for the State and business done within its borders.

So what’s the point? Simply this: I hear from Chambers of all sizes across the country that they don’t get involved in politics. They say that their Board of Directors doesn’t feel its right to comment. They tell me they’re not comfortable choosing sides. The excuse list is a mile long. But look what happened here. Eventually, the Indiana Legislature created a fix for the RFRA that seems to have solved what looked like a serious issue of possible discriminatory practices in the future, but not before a great deal of damage had been done. I implore you…I’m BEGGING you…please take this post to your Board of Directors. Read it to them if you don’t think they’ll take the time to read it themselves. They have to understand…WE have to understand…that it is absolutely the duty of EVERY Chamber of Commerce across the globe to speak loudly and aggressively about issues that will potentially affect the way business is done in our area. Associations aren’t out of the woods on this, either. Regardless of whether our influence spans only a few square miles of local territory or an entire industry across the country, it is our responsibility to protect the business interests of those we serve. We can’t afford the luxury of keeping our opinions to ourselves. Look at the Indiana Chamber. They do TREMENDOUS work and are a shining example of what State Chambers should be. And yet even THEY would likely admit they should have jumped out early and often in advance of this legislation. If there’s an election coming up in your community and one candidate is clearly better for business, it’s our obligation to stand up and say so. We don’t support entire political parties or even tell people who they should vote for, but we SHOULD be able to tell our members who we endorse in terms of our own best interests as a group. If there is a piece of legislation being debated, our members and the public at large is listening to what we have to say about it. They want our opinion, and as the “Voice for Business” in our communities, we must be vocal.

I mentioned at the beginning that I’ve had to edit this post continuously for 2 weeks. It’s true. I’ve tried to soften my stance, but I keep coming back to the fact that I believe STRONGLY in this. I can’t soften my stance any more than I think you should soften YOURS. Speak up! Be heard! Take a stance! Yes, some of your members or the public may disagree and you may even lose a member here or there…but if you take the time to educate people about WHY the Board has voted to support one side or another, you’ll win far more than you’ll risk losing.

It matters. Your voice matters. Don’t ever let anyone take that away.

DISCLAIMER: This post is ABSOLUTELY NOT to endorse either side of the RFRA debate. Feel free to comment below, but any responses to this post that attempt to engage in debate about the legislation itself will be deleted. Thanks!

About the Author: Jay Handler, IOM

As a sought-after speaker, trainer, consultant, Jay’s diverse client list includes small business, corporate brands, associations, chambers of commerce and non-profits. His clients have included Comcast Business Class, the National Kitchen and Bath Association, South Carolina SAE, Carolinas CCE, Minnesota CCE, local Chambers across the country and internationally at the Engage Mexico Social Media Conference. Additionally, Jay is in his second year as a faculty member for the US Chamber’s Institute for Organization Management. Aside from M180s core business of Recruit, Engage and Retain, Jay offers training to clients from his career background of sales, marketing and social media. [email protected] (866) 960 9789 Ext.102